Collegiate Cup 2019: A Hackathon with Equity in Mind 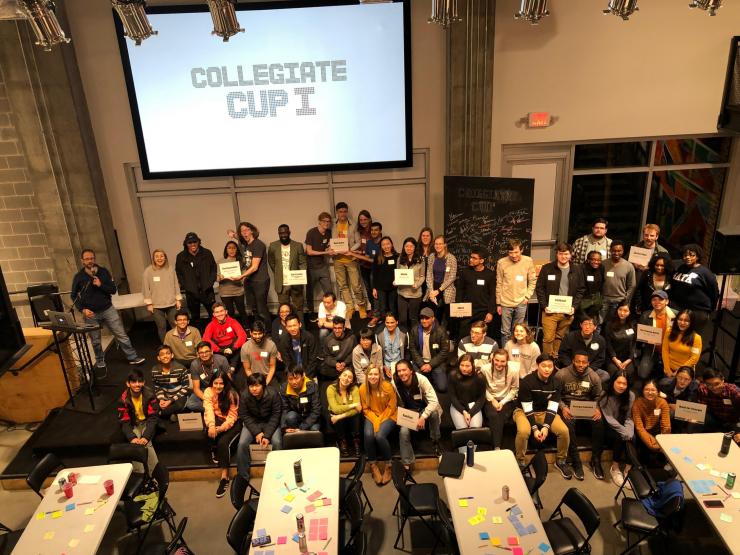 May 20, 2019
AM
Allie McFadden
Communications Officer

Before Super Bowl LIII came to town there was another championship happening just a few miles down the road from Mercedes-Benz Stadium.

From Jan. 25-27, students from eight colleges and universities gathered for the first-ever Collegiate Cup hackathon in the state of Georgia. The hackathon was the first statewide competition that focused exclusively on improving the quality of life for Georgia residents.

Two teams from Georgia Tech were named state champions in the design and case study categories respectively. The MGA Knights from Middle Georgia State University were named the state champs in the coding competition.

The Constellations Center for Equity in Computing at Georgia Tech served as a challenge partner for the three-day event. In this role, Constellations collaborated with the North Georgia Innovation Center (NGIC), SandboxATL, and HackGT to formulate the three challenges, each of which had an emphasis on improving equity in computing.

“I was blown away with the quality of work and enthusiasm from the students all weekend long. All of them brought their A game and it was exciting to see so many students working together to make others’ lives better,” said PK Graff, Constellations Fellow.

In each category, teams were asked to generate actionable ideas that would build on Georgia’s strengths to improve the quality of life for all Georgians. Deliverables were further defined by asking teams to focus on increasing access to computer science education for all communities across the state.

Competitors in the coding and design categories were given a set of specific challenges to address within their category, before choosing one challenge to focus on and develop a solution for. Meanwhile, the case study competitors were given an organizational challenge to address. These ranged from finding solutions for helping talented students in low-resource schools gain access to advanced computing courses to school administrators working in districts without broadband access.