Lauren Jones is Ready to Tackle Computer Science, Social Justice Issues, and LGBTQ Rights During Her Time at Georgia Tech 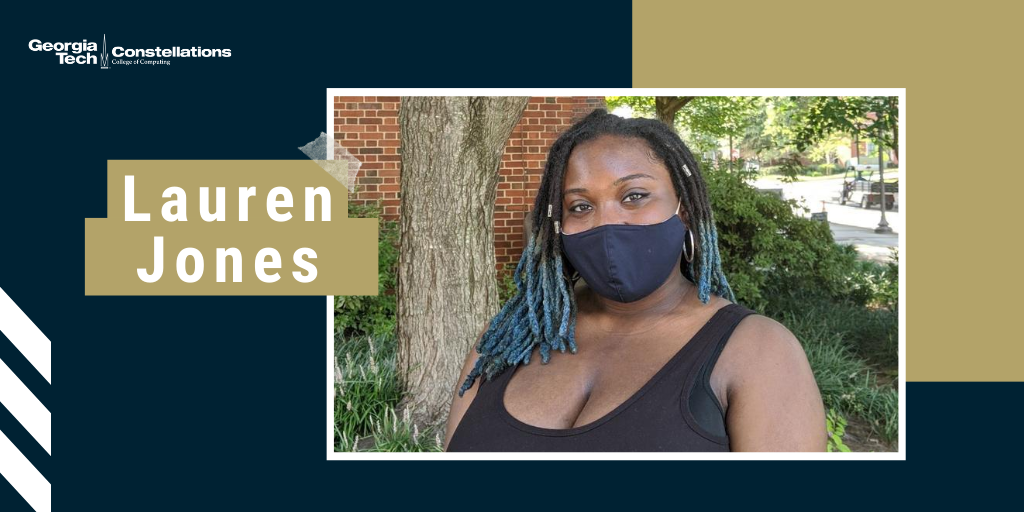 Lauren Jones’ parents are still hoping she’ll become a doctor. While she is interested in science, it’s computer science over medical science that excites Jones, an incoming first-year student at Georgia Tech.

Jones comes to Georgia Tech as the salutatorian of the Coretta Scott King Young Women’s Leadership Academy. It’s an accomplishment that means a lot to her, but also didn’t surprise her.

“Being salutatorian isn’t something I necessarily strived for. I just did my best and it turned out that doing my best earned me this honor. Doing my best is something that I will always continue to do, because if you do, you’ll probably end up at least having some success,” said Jones.

An Atlanta Native Active in Finding Community on Campus

Attending Georgia Tech was an obvious choice for Jones, an Atlanta native, as she wanted to stay in the state and attend an academically strong program. She’s also familiar with campus after working as a biomedical researcher through Project ENGAGES – a program that selects students from seven minority-serving public high schools in Atlanta and exposes them to career path possibilities in engineering and science.

Her experience with the Constellations Center for Equity in Computing at Georgia Tech’s (Constellations) Computing Equity Project also contributed to her decision to attend Georgia Tech. Jones felt comforted knowing she’d have familiar faces like Constellations Fellow Terry Foster and Assistant Dean for Outreach, Enrollment, and Community Cedric Stallworth on campus. When deciding on her major, Jones reflected on how much she enjoyed taking Advanced Placement Computer Science A with Constellations and has decided to major in computer science.

Jones is the second student from the Computing Equity Project to attend Georgia Tech. She joins Mays High School alumna Charity Tarver, who is also majoring in computer science.

Life as a Yellow Jacket

Jones has been on campus since the end of July participating in Georgia Tech’s Challenge and ESTEEMED programs. Both programs have been helping Jones acclimate to campus as a student and help her find a community with other minorities on campus – something she is looking forward to continuing to build.

“I think helping minority students meet people who look like them, have similar interests, and even have the same major is very important. We’re in Atlanta, but the campus population of Black students is still very small. These programs have been helping me feel more connected to campus and ready to tackle my classes knowing that I’m not the odd-girl out,” said Jones.

As an undergraduate, Jones hopes to be an integral part of LGBTQ and Black student groups on campus. An active advocate for both communities, she wants to do more for them as a college student.

“We are in the heart of Midtown with rainbow crosswalks! I’m excited to get more invested in LGTBQ rights activism and the social justice movement outside of the protests I attended this summer after the death of George Floyd. If my voice is not being heard, I’m going to make sure you hear it,” said Jones.

In the classroom, Jones is hoping to learn more about careers in computing. So far, she is most drawn to software development and potentially video game design, but is open to learning about other computing careers. After graduation, she hopes to drive a Tesla and work internationally in technology.

While her parents are still hoping that Jones will add Ph.D. or doctor to her name, Jones isn’t sure if that’s what her path holds for her. She is, however, minoring in neuroscience just in case.