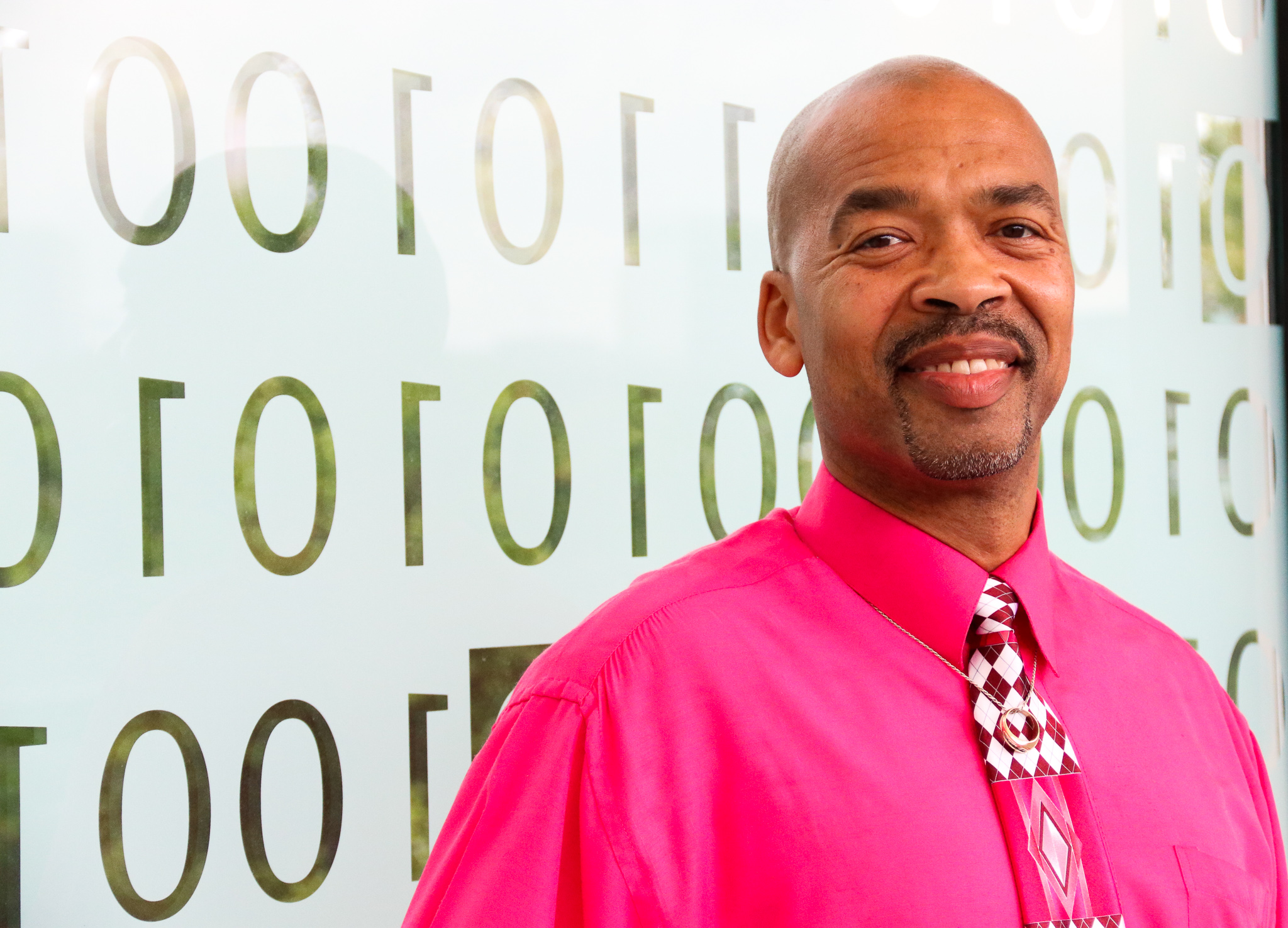 Sababu Barashango, the newest fellow at the Constellations Center for Equity in Computing at Georgia Tech, is soft-spoken, despite holding a third-degree black belt in martial arts. Numbers and math formulas are his love language and he likes to draw in his spare time. Drawn to computer science because of its ability to combine his artistic and mathematical interests, Barashango is looking forward to helping more students and teachers in the Atlanta Public School (APS) district, where he is partnering to teach computer science.

A Philadelphia native, the devout Eagles fan arrived in Atlanta as an undergraduate at Morehouse College in 1991, where he later earned a degree in mathematics and French. A brief flirtation with law and economics during his freshman year left Barashango unfulfilled and seeking self-reflection.

While reflecting, he discovered that he was happiest when he gave his time to help others. A natural mathematician, Barashango often lent a hand to classmates throughout high school and college, sometimes skipping lunch to tutor his peers.

“It was ingrained in me from an early age that it’s important to give back to the community. I started to think about my skill set and how I could use that to give back. From there, becoming a teacher seemed like a clear answer,” said Barashango of his eventual career choice in education.

A Star in the Making

Barashango started his teaching career immediately after graduation with no teaching experience. While earning his master’s degree in math education from Emory University, he gathered first-hand classroom experience at McNair High School (then a junior high school).

After briefly moving to Delaware where his wife was stationed at Dover Air Base, Atlanta became home again. Barashango took a job at Dekalb County Schools, where he worked as an educator and webmaster from 2002-19. His impact was recognized in 2007 and 2016, when Barashango was named Teacher of the Year.

Unaffected by his own achievements, Barashango says, “The way I look at my success is when my students are successful. When they come back to you and say thanks for sticking with us or for believing in us, that means more to me than any award ever could.” Nothing Can Stop You

In college, Barashango had a professor who gave everyone the honorific of “doctor” followed by their last name. He never asked the professor why he did it, but Barashango has adopted it into his teaching style over the years.

“I call all of my students doctor because I want them to know that no matter what they choose to do in life, scholastic or medical or not, that they can reach that high level of potential. I want them to get used to hearing being called that title, because after a while you start to believe it and once you believe it, nothing can stop you.”

Barashango, who is multiracial hopes to be a role model to his students and inspire underrepresented minorities to chase their dreams.

“If people don’t see people that look like them in that field, then subconsciously or consciously, they start to think that they can’t do that either. I hope I help them see that that’s not true.”

A Cheerleader for Teachers

Barashango also understands the struggles that many teachers face.

“I was the only computer science (CS) teacher in my school, which made it extremely hard to collaborate with my colleagues on creating a great curriculum. There were others in the district, but not at my school. I can’t imagine being the only CS teacher in an entire district, but it’s often the case,” said Barashango.

With 181 school districts in the state, and around 100 qualified computer science teachers, Barashango’s experience is normal – and a part of the teacher shortage issue.

A significant portion of a fellow’s time and energy is dedicated to teacher professional development.

“My role is to help the teacher as much as I can. I’m here to help empower the teacher and keep them feeling empowered so that they can better assist their students,” said Barashango.

Working with teachers at Douglass High School and Grady High School – his two assigned schools in APS – Barashango expects to have some serious conversations and reflections about what’s happening in the classroom. Together, they will figure out ways to increase or help improve student success and student performance.

“It’s going to be a challenge, but I’m looking forward to being their teammate and bringing positive energy into it.”

For someone whose name literally means, “He who takes the struggle upon himself,” the role of a Constellations fellow seems like a perfect fit.